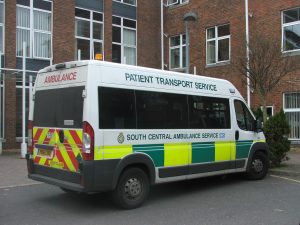 The chief executive of NHS England has announced a national review of patient transport services after people revealed problems to local Healthwatch and national charities.

People’s concerns collected by local Healthwatch, about problems travelling to and from health appointments, have led to NHS England announcing a review of patient transport services.

The review is expected to look at formal arrangements for bringing eligible people to outpatient appointments, lifesaving treatment such as radiotherapy or dialysis, or back home after hospital stays, via non-emergency ambulances. The review could also consider wider issues about public transport access to NHS services.

This came after people from across England – including Buckinghamshire – revealed the impact of poor transport in their responses to a Healthwatch survey and focus groups run earlier this year (see below). Age UK and Kidney Care UK have also collated evidence and joined forces with Healthwatch England to force the government to take action.

A joint survey by local Healthwatch in Berkshire West, Oxfordshire & Buckinghamshire carried out in Spring 2019, found 69% (639 people) thought it was very important to have convenient ways to travel to service.

Better transport in rural areas, especially when getting to doctors’ surgeries and hospitals. It is also important to have transport that enables people to visit people when they are in hospital, which can help them remain positive and so aid their recovery.

Better local transport [is needed] for when driving is no longer safe.

Attending hospital can be a worrying time for many patients which is why we want to make sure that their journey to and from appointments is as smooth as possible.

The national review “will listen and act on concerns raised by patients”, he added.

Imelda Redmond, national director of HWE, said evidence collected by all local Healthwatch showed that for most people, good transport was more important than where to be treated or digital access to services.

Caroline Abrahams, charity director at Age UK, added that its own research showed almost one-fifth of over-65s feel worse after their hospital appointment because of the stress involved in their journey “and is clear that the way patient transport is organised needs a total overhaul to make it fit for purpose”.

Fiona Loud, policy director at Kidney Care UK, said there were difference between dialysis units in how transport was organised or how patients were reimbursed if they made their own way to hospital.