And the winner is…..

It might have been cold and wet outside, but inside, the excitement was building for the 2018 Dignity and Respect Awards.

This year, I followed the event through the eyes of one of the nominees, Karen. Not only was she accompanied by her mum but also by the person who nominated her and her family, two of her colleagues and a friend! A party of 9, all there to support one individual because of the dignity she shows every day whilst caring.

The afternoon, introduced by Councillor Wendy Mallen, was opened by Gillian Quinton, Buckinghamshire County Council’s interim Director of Communities, Health and Adult Social Care. She stressed the importance of equal access for all and the desire for individuals to live independently and to be given the support to enable them to do this. Edmund Tabay, the Deputy Chief Nurse at Buckinghamshire Healthcare NHS Trust, reinforced this message in his speech. He added that an important aspect of giving people dignity is involving individuals in the decision-making process. Our final speaker was Ethel Ohunyon, a social work student, who’s just completing her masters. Through several scenarios she illustrated the importance of not just knowing the theory of what dignity entails but also being able to apply this knowledge.

After this came the short films about the nominees for each award. Karen had started the afternoon wondering what all the fuss was about. Like many in her position, she felt that she was just doing her job and didn’t deserve an award. By this point though, she was starting to feel a little nervous. We were told there had been an increase of over 30% in online votes on last year and the panel had found it very difficult to create the shortlist. Soon, the Dignity Champion category came up and Karen was overwhelmed to be declared the winner.

Karen was nominated by Elsie, who is 94 years young, for her understanding, making her feel secure and taking time for the things that are important to Elsie. In the film, Karen’s warmth shone through as she said to Elsie “I love caring, and it’s a positive job. It’s a job that makes a difference. If you’re feeling down, I like to make sure you’re smiling by the time I’ve left.” Elsie then summed up “It’s the all those little things… that she does make that makes so much difference to me.”

Congratulations must also go to all the winners and runners up:

Thank you again to all the hard work put in by the Quality in Care team to host these awards. 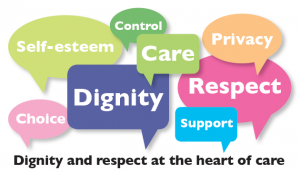